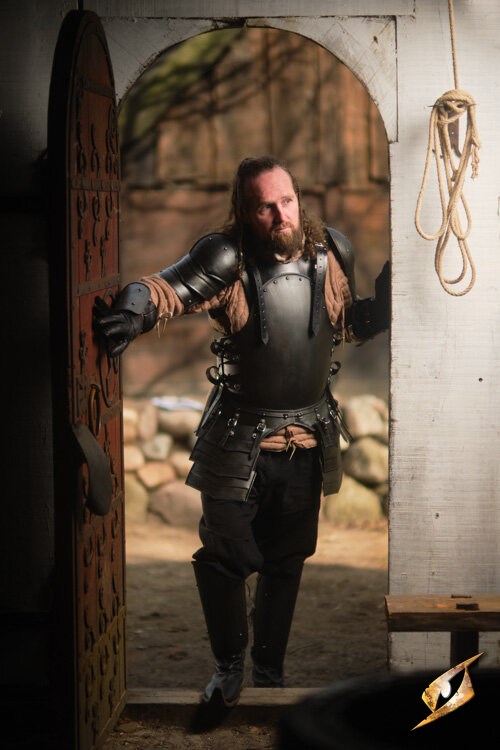 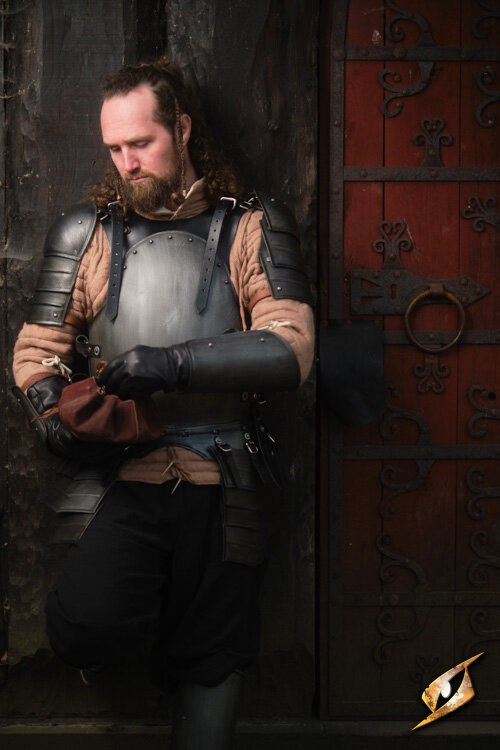 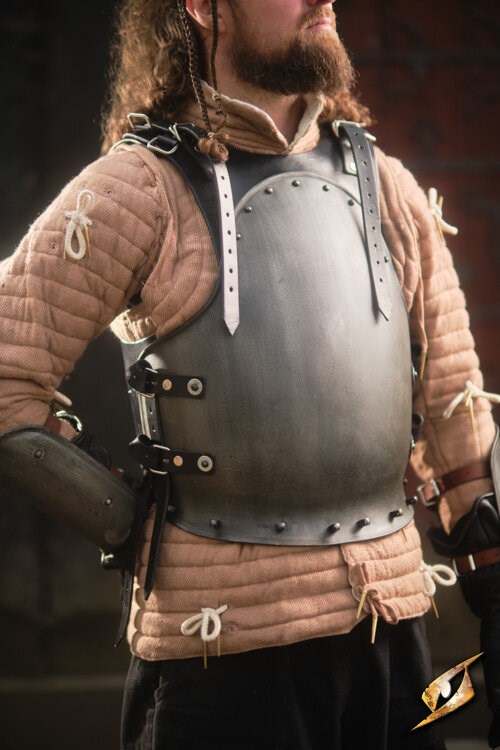 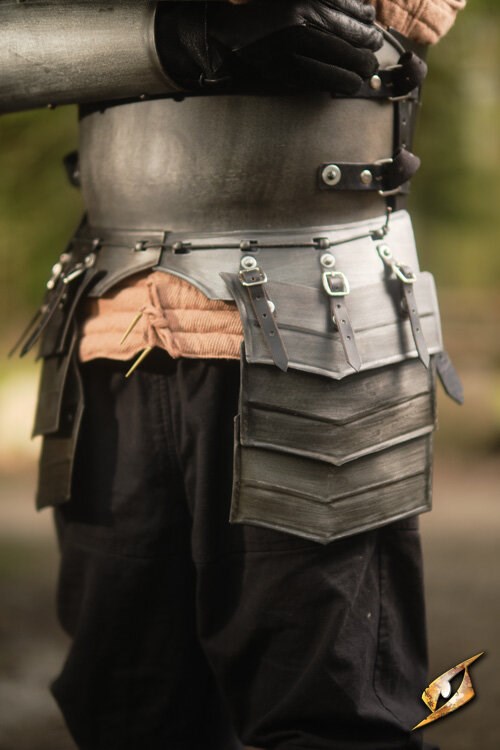 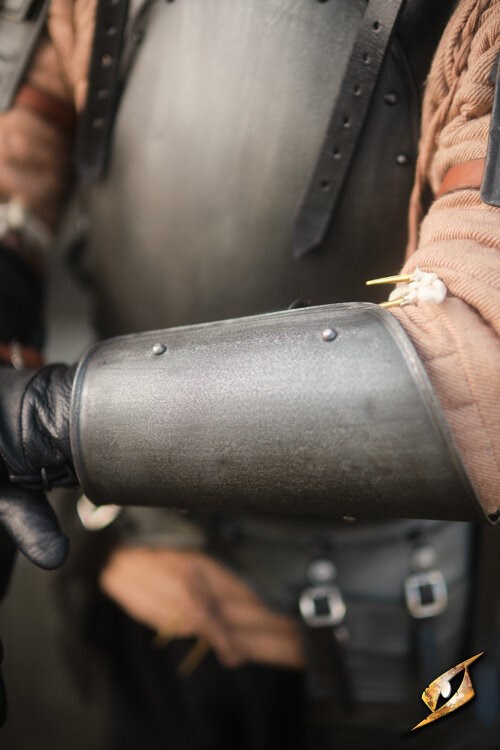 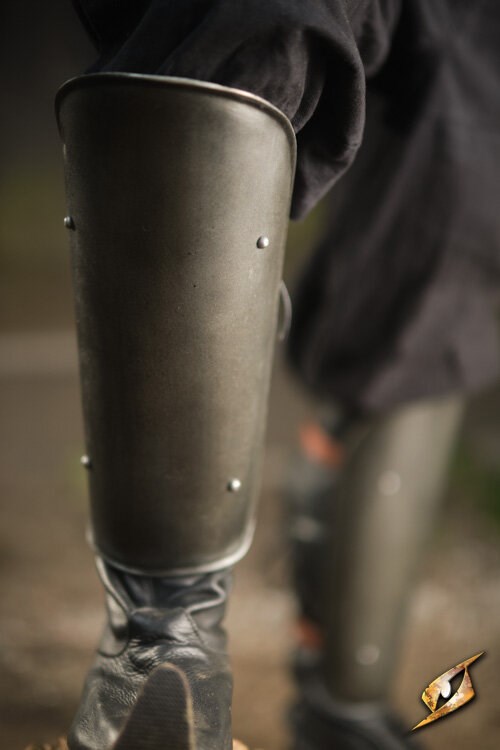 Someone might say that you are a cruel person. The truth is that you aren’t cruel--but you certainly aren’t a hero, either. The Battle of Delle is not one for your homeland or for your own people, but the pay is good and the fighting even better.

Life as a mercenary has made you into a hardened and effective warrior, and while some call it ‘luck’ when your enemy’s sword slides off your Merc Armour, you call it strategy. After all, now your enemy’s heart is a wide open target.

This bestselling armour set includes Epic Armoury’s Mercenary Torso Armour, Tassets, Shoulder Plates, RFB Arm Protection, and RFB Leg Protection, in order to fully gear your costume needs at a lower cost. Each piece is made from mild steel with rolled edges and top-grain leather straps and fittings, built to withstand the abuse of a LARP or reenactment while keeping the user safe and comfortable. With regular leather and metal armour care, you can expect this armour set to last for a long time!

Available in Black and Brown leather, and in size Medium/Large.

The Mercenary Torso Armour is a cuirass made from leather and steel covering the front and back of the wearer's torso. The front of this breastplate circles the wearer’s neck in an inverted U-shape, with the chest apex protecting the thorax before sloping around the ribcage to protect under the arms. The lower edge of the breast plate is slightly rounded, allowing it to fit around the crests of the hips and still cover the vulnerable pelvis. The steel plate is fitted on a black leather suit, which straps to the back leather plate at the shoulders and the sides.

The Mercenary Tassets are reminiscent of the typical pikeman armour of the late medieval and renaissance era. The piece consists of three broad metal plates overlapping each other to provide laminate protection for the hips and upper thigh. Historically, these laminate plates and its sculpted ridges reinforced the armour and helped deflect the attacks suffered in the large pike mass-brawls of the medieval European battlefield. The tassets leave the pelvis somewhat unprotected, and normally a cod-piece would be added to protect the groin area. The Mercenary Tassets are the only tassets not fully interchangeable with other Epic Armours, as they have been made specially to fit the Torso Armour Merc through a set of square eyelets on the Merc armour. The tassets are secured in place with leather cords.

The Shoulder Plate Mercenary is a set of two shoulder guards. The spaulders are metal plates with sculpted ridges overlapping one another to provide laminate protection for the shoulder-joints and upper arms. The Shoulder Plate Mercenary goes very well with the ‘Merc’ armours but are fully interchangeable with other Epic Armoury armours, giving full freedom to customize characters costumes.

Ready for Battle Arm & Leg Protection is an essential for any person intending to experience the battlefield. Due to these vambrace’s and greaves’ simple style, this packaged deal is an armour solution that can be used across different genres and character-types.

Epic Armoury metal works products should be treated with a wax or quality acid-free vegetable oil and kept in dry storage. Metal armour containing leather parts would needs a separate maintenance for the leather. Please read the "Leather Straps and Fittings" section below for leather cleaning and maintenance using leather-care products.

Degreasing and preparing your armour for use

When you open your armour, you may be overwhelmed by the smell of grease and oil. The oil has been applied to protect your armour during storage and transport. Use a degreasing product or mineral spirits and a dry cloth or paper towels to remove all the oil from your plate armour parts. Chainmail is a bit harder to remove all the oil from the links, but it can be done in much the same way. Wipe off as much as you can with a dry cloth, and with the remaining oil, you can remove the grease from the chainmail with mineral spirits or another solvent by spraying it on the links. You can also choose to fully submerge your chainmail in a degreasing product and use your hands to agitate the metal in the solution, this will completely remove all oil and grease from your links. After removal of the oil, make sure to dry your armour thoroughly. Strong, warm sunlight is great for drying your armour, but you can also use a hairdryer or a heat gun to speed up the process. Be careful not to overheat any leather parts when using a heat gun.

Moisture is the enemy of armour and chainmail. If your armour does get wet, it is important that you dry it thoroughly as soon as possible. After handling, wearing, or after six months of storage or display, all metal should be wiped with a clean cloth. Lightly oil the clean surface with a quality acid-free vegetable oil. Alternatively, you can apply a coating of wax to the entire surface of the exposed metal. Allow the wax to dry for a couple of hours and then buff it lightly with a soft cloth.

Store your armour is a dry place and check it every couple of months for signs of rust. If any is found, remove it by gently rubbing the affected spot with a mildly abrasive pad dipped in wax or quality acid-free vegetable oil. Epic Dark products are specially treated to resist rust, but should still be treated with oil and kept in dry storage.