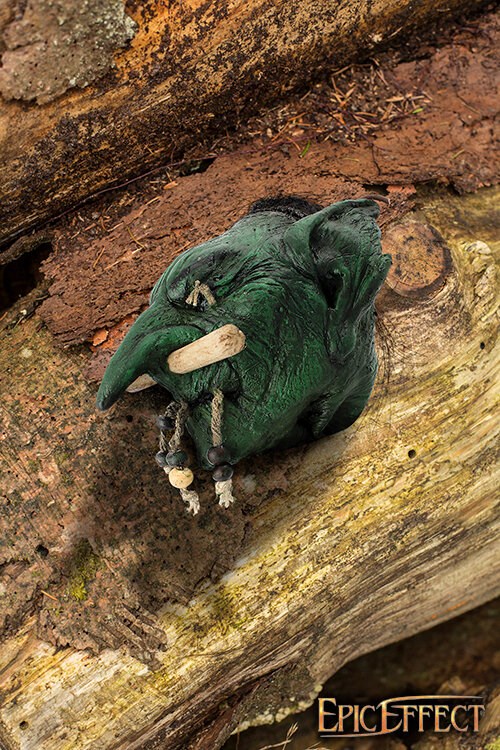 You hate goblins. They're small, annoying, and mischievous creatures that have given your family more grief than is healthy. The next time a goblin tribe tries to steal your horses, you set up a trap for them. You manage to snare one, which you kill in revenge and as a warning to his friends.

With careful precision you prepare the head and leave it hanging on the edge of your property. Maybe the next goblin will think twice before bothering you.

Epic Armoury’s Goblin Shrunken Head is a ghastly latex accessory designed to look like the shrunken head of a goblin foe. Made from 100% natural latex and synthetic hair, this head adornment can be hung from a belt or staff using its long black hair. It is sure to create fear in the hearts of your enemies.

The Goblin Shrunken Head is 12cm tall and 8cm wide with a long nose and pointed, gnarled ears. Sculpted and handpainted details make it appear as if the head had been cut off, de-boned and preserved through a drying process. A sculpted latex bone has been set through the trophy’s nose and the lips have been pierced with beaded strings for decoration. The Shrunken head is green-coloured with shaded creases and wrinkles. It can be carefully dry-brushed or customized using Epic Effects Make-Up.

After each use, wash the head with a damp sponge or cloth with a mild detergent to remove the natural oils from your skin. After drying, dust it lightly with baby powder.

Do not expose the mask to direct sunlight for a prolonged period of time.