The banners have been called! The warriors are assembling and will soon await your command. Your liege awaits the arrival of the lances fournies by dusk, and your squire is preparing your steed. Who are you? You are a knight! Or perhaps you are merely considering playing one during your next LARP campaign session? If so, you may wonder about the essential characteristics of a true knight. Look no further! Here are six patrician points for your upcoming knighthood!

Since time immemorial, there have been stories about heroes and monsters, trials and perils, affection and animosity, triumphs and tragedies. However, the classical mediaeval knight was introduced from the practice of “benefices”, a feudal system originating from the Roman Empire wherein a vassal was given a piece of land and privileges in return for military support. This practice was especially continued by the Frankish ruler Charlemagne (747–814), who required mounted elite warriors to protect the Carolingian Empire. The deeds of knights were often commissioned to be expressed through epic poems – the “chansons de geste” – among which “La Chanson de Roland” is among the most famous. This poem from the 11th century describes the deeds of Roland (Hrōþiland), one of Charlemagne’s vassal knights, who died a martyr’s death during the Battle of Roncevaux Pass on the 15th of August 778. “La Chanson de Roland” is one of the oldest surviving pieces of French literature, and several revised manuscripts from the Middle Ages and Renaissance testify its enduring popularity.

This story of sacrifice from a loyal cavalier to his benevolent king has formed the archetype of a noble knight in shining armour. Stories of knights echoes throughout the ages from mythical knights, such as King Arthur, Lancelot, Parzival, Titurel, but also historical knights, such as El Cid (1043-1099), William Marshal (1146-1219), William Wallace (1270-1305) and Joan of Arc (1412-1431). An Epic Armoury is needed to don legendary knights of upcoming tales!

Have a look at our Royal Captain Chainmail, Royal Soldier Chainmail, Scout Chainmail and Chainmail Sleeves for inspiration. Perhaps you are preferring full plate armour such as the Warrior Armour, Gothic Armour or the lean and light-weight Mercenary Armour? 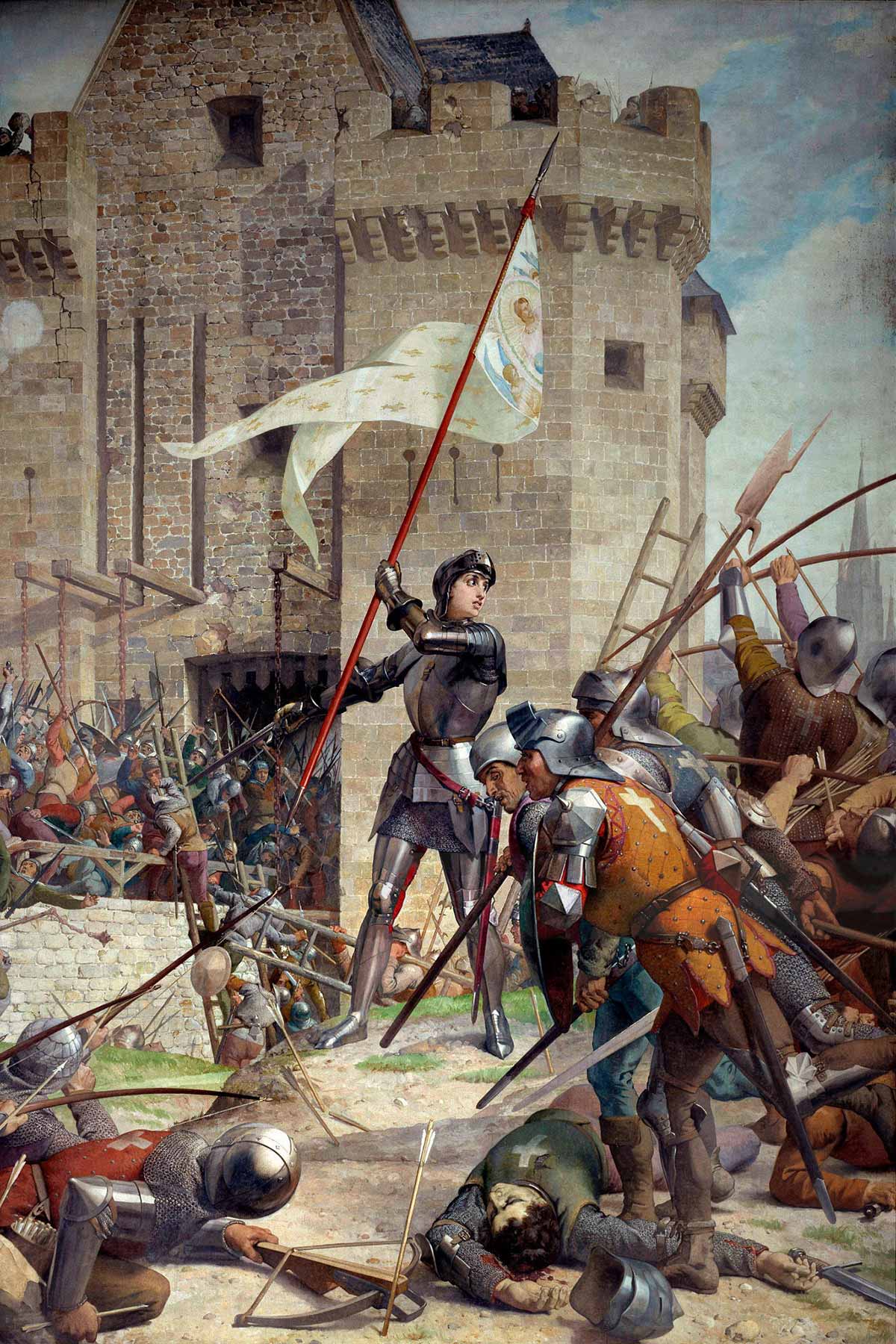 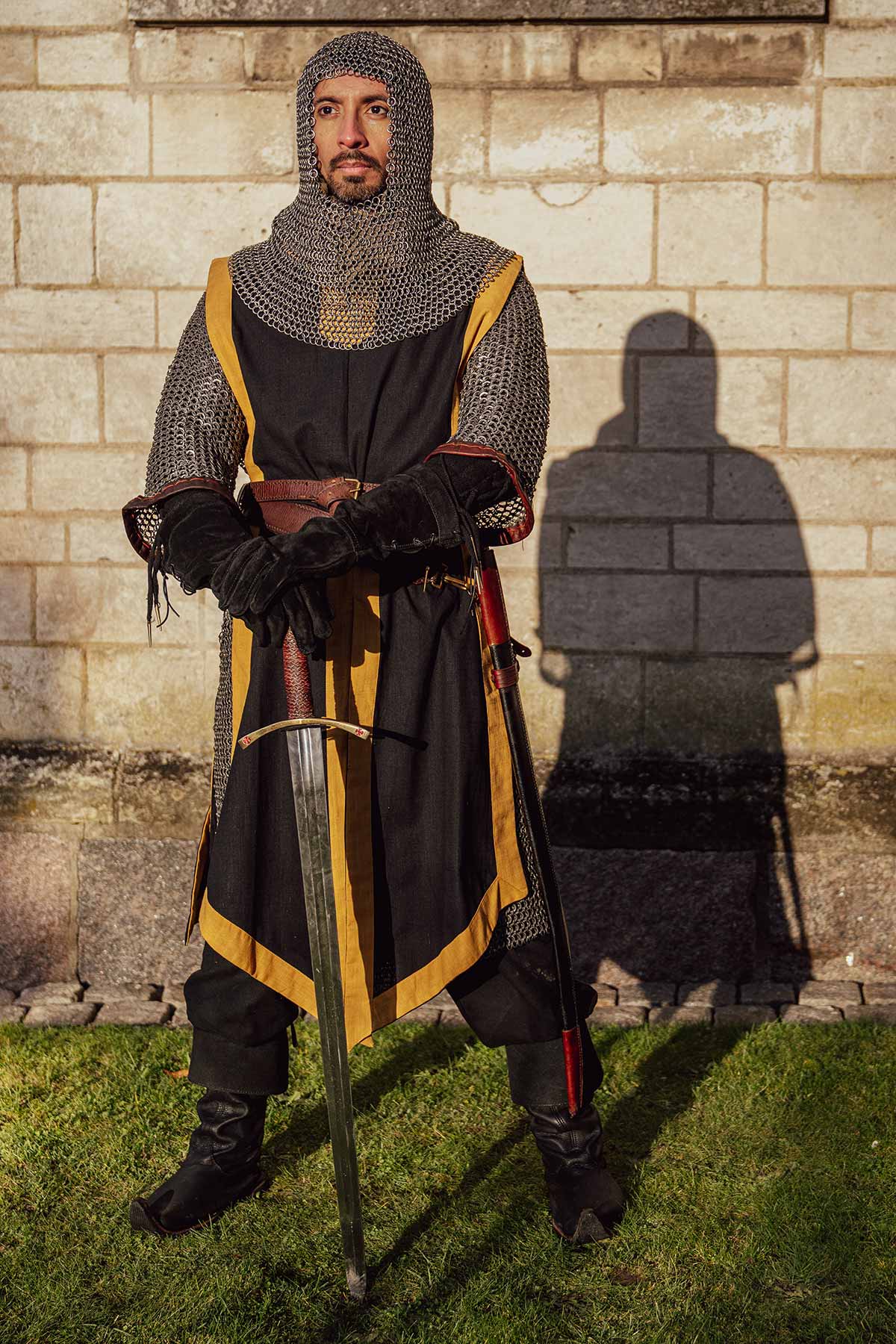 A mediaeval knight was essentially a high-ranking elite soldier in the feudal system. With their honorary titles followed many responsibilities and privileges, but above all was their loyalty and military service. A knight is a highly trained warrior who often will display their allegiances and heraldry in public, making it evident that they are exalted servants of their liege. Some knights are even trusted to carry the King’s Colours into battle! Such honour carries the weight of a double-edged sword: The loss of a colour, or the capture of an enemy colour, may respectively be considered as the greatest shame or the supreme glory on a battlefield. A knight’s colour or coat of arms is often depicted on tabards, shields and tents, but symbolism can easily extend beyond that. How will you display your coat of arms?

Have a look at our Clement Tabards and Basic Tabards for colourwise inspiration. Perhaps also a Lion Shield or Chequered Shield?

“I answer to a code that is clearly defined. If my actions are true to that code, I am just. If they are not, I am unjust. I don't pretend it is a simple matter, or that it seems right to everyone. But I sleep well at night, and that is more than most can say.”

What sets distinguish the knight from a mere warrior? Above it is their sacred vow, code of conduct or moral principles. Whereas most heroes often risk their lives for honour, glory and treasure, knights are willing to die for their code and principles. A streak of adherence marks a knight's loyalty towards the law, his liege, order, deity, or philosophical doctrines. If a knight only adheres to a single of these aspects or multiple adherences act in concord, the path is straight and simple. For example, when the king is benevolent, the law is just, and the knight is lawful good. But a more complex and compelling story arises from dilemmas sparked from a conflict of interests. If you have vowed to uphold the law and follow a principle of mercy, will you then kill the peasant thief who stole food to feed his family if the law prescribes so? Will you abandon investigations of an abusive emissary if his position granted him diplomatic immunity? Would you kill a bandit child if so ordered by your king? Loyalty lies at the heart of a knight, and conflicting loyalties lie at the heart of a great story! Whereas the code of arms on a tabard is a clear symbol of commitment, there are other and more subtle ways of displaying allegiance. A distinguished emblem, an ornamented diary or perhaps a signature eye colour? A myriad of options is available! For example a bound leather diary or a scroll holder for formal reference? 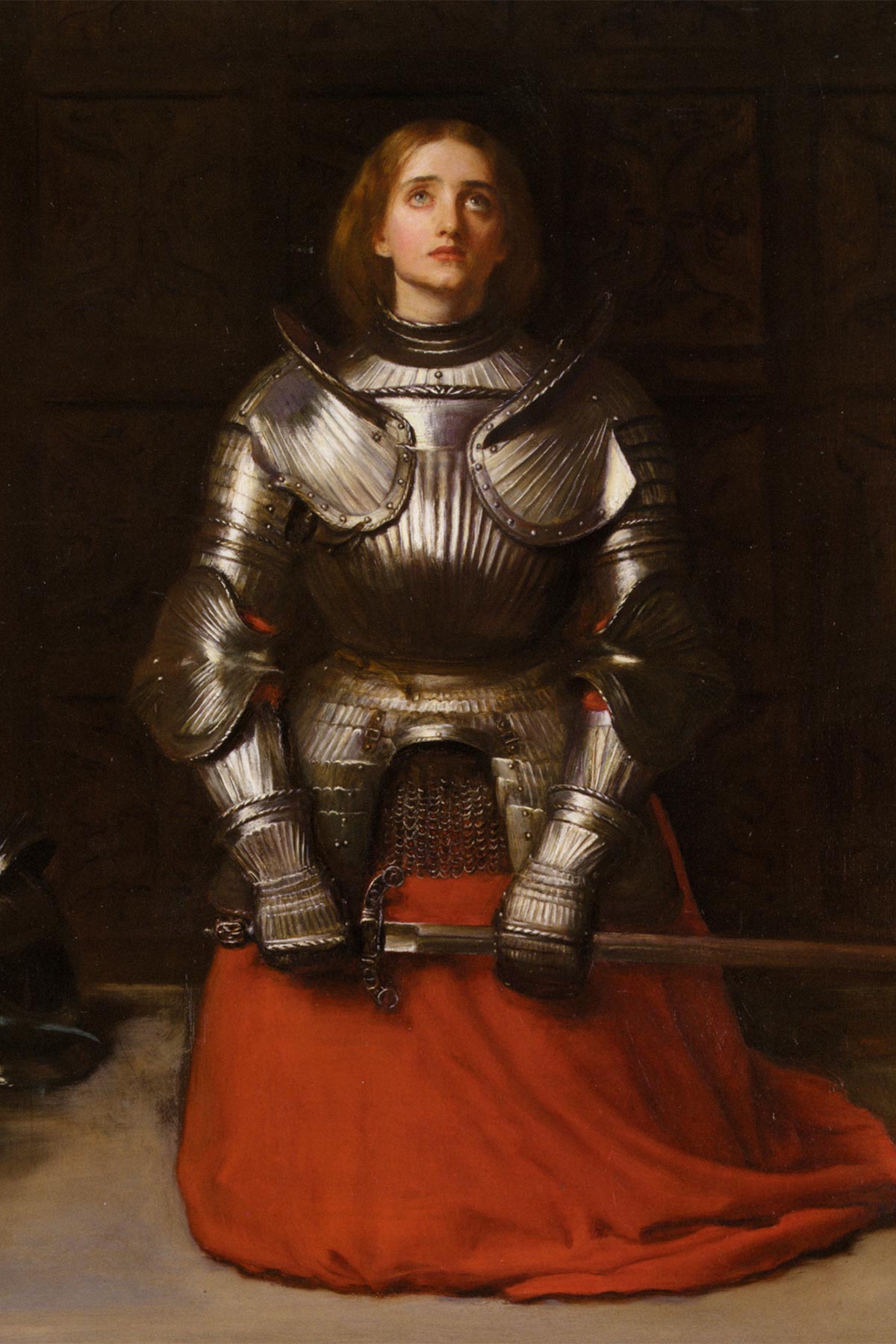 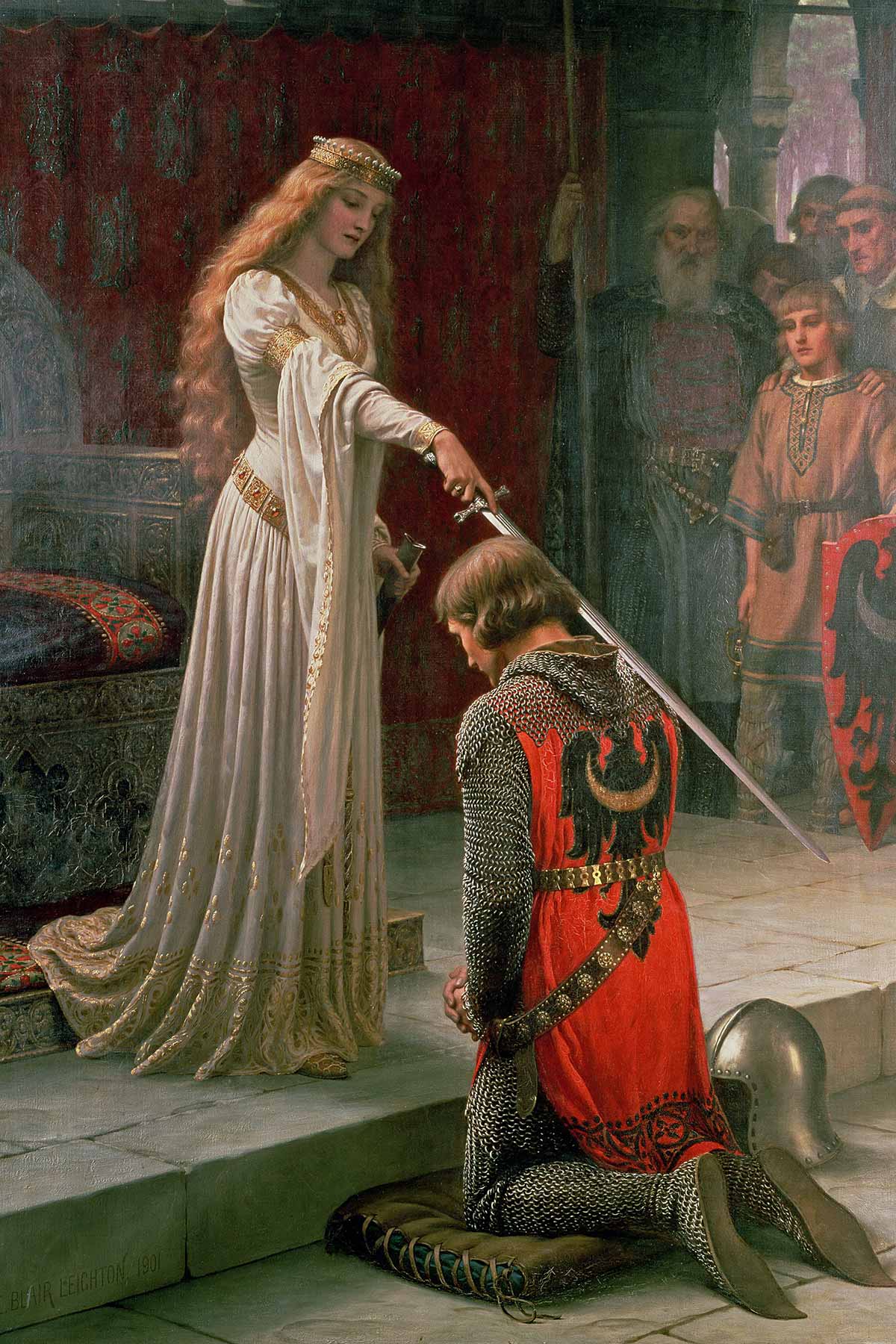 "Today, you find yourselves equals. For you are all equally blessed. For I have the pride, the privilege, nay, the pleasure of introducing you to a knight, sired by knights. A knight who can trace his lineage back beyond Charlemagne."

To be a knight is more than military training, a code of conduct and a code of arms. Their deeds run in the blood. Literally. Historical knights were often boys of noble birth who were negotiated into serving a knight as a page from the age of seven, later as a squire from the age of fourteen before finally receiving knighthood by the age of twenty one. Being of noble birth in a feudal society is significant concerning possessions. Knights generally have much better weaponry and equipment than the average footman and mercenary. A good challenge is then how to express your lineage and wealth in your choice of equipment. But that should not be the only question. With blue blood thrumming in your veins, you will most likely have several servants or a squire in your company. Characters who rely on your patronage. This makes it challenging to play a person of high social status. Unless you are playing a solitary knight, which many characters may find suspicious, you will rely on other companion characters to support your social status. If carefully coordinated, such a group – a knight with an entourage – can be truly awe-inspiring. What is the group dynamic between you and your servants? How do they support your social status? And what kind of apparel and equipment have they been given? Stylewise there are many options. Your squires will definitely have an Arthur Tabard, but will they wield a Squire Sword or a Battleword Squire Sword?

“At midday, Arn's most beloved horse Khamsiin was led up to the city gate, saddled and covered with a coat of felt and chain mail along its sides. The attack that was imminent would be considerably more dangerous for the horses than for their riders, but he had chosen Khamsiin because mobility and speed were more crucial than a heavy frontal assault. Their paths would soon part in one way or another, and it was of minor importance which of them died first.”

This next aspect of the knight is visually simple and practically challenging. Throughout history the knight is described and depicted not only as a warrior but a mounted warrior. In history, this refers to warhorses, but fantasy settings have also shown knights to ride mythical creatures – even mighty dragons! – into battle. A knight is called “chevalier” in French and “ritter” in German, which both refer to cavalry. One does not simply ride into a LARP, so the question is how a steed can be played out so that other players and their characters get a sense of its presence. Perhaps a saddle, saddlebags and a bit of hay in the camp to hint at nearby stables? Or asking your squire to ready the horses before battle? Boast about the dramatic events or prize won at the most recent jousting tournament? Perhaps, if you are a knight of magical aptitude, you can cast a Phantom Steed-like  summoning spell from a precious heirloom wand? While we cannot offer your steed, we can certainly provide a wand for your knight! For such a take, we suggest the Enchanter Wand, Faust Wand or Durentius Wand with a matching sheath. 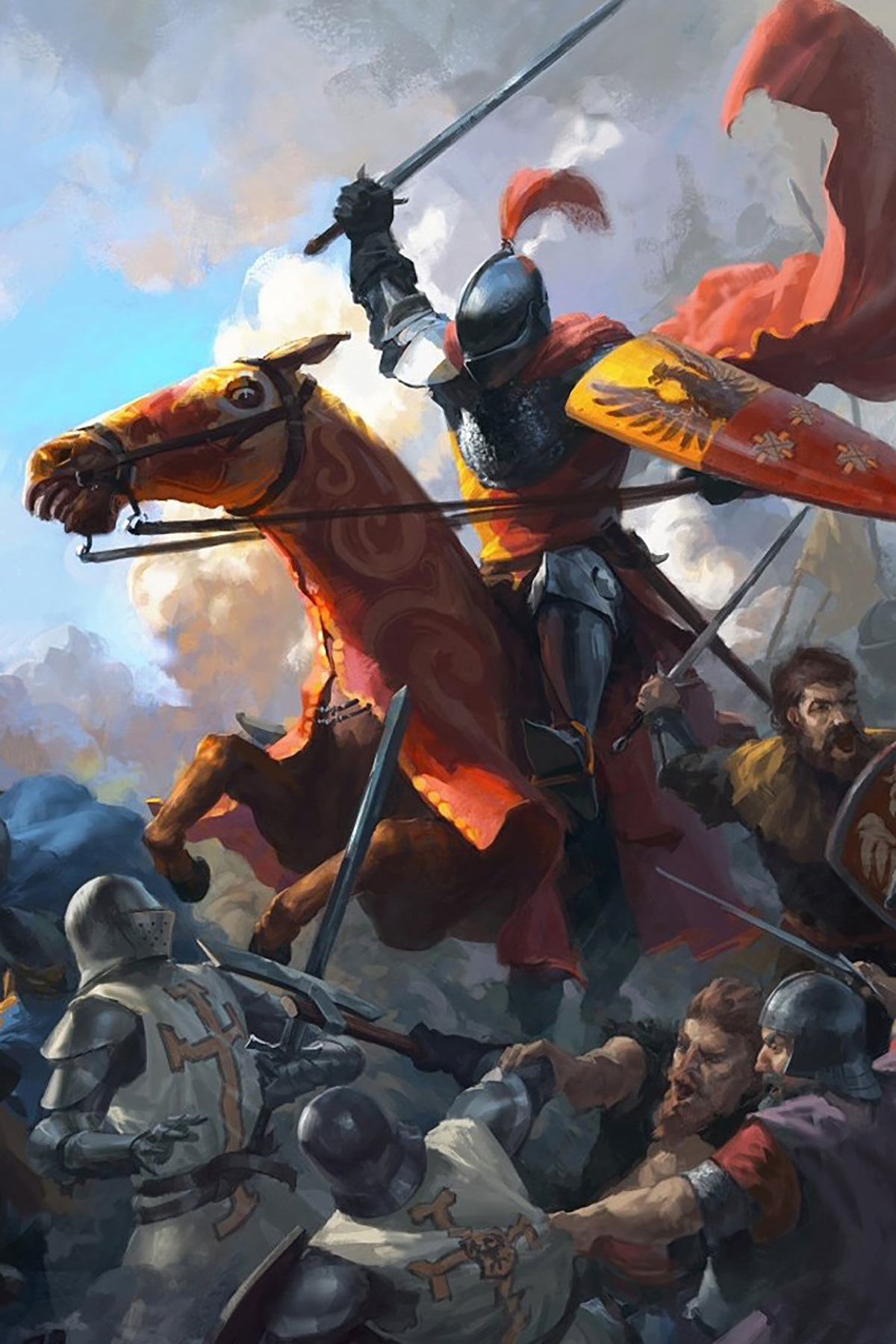 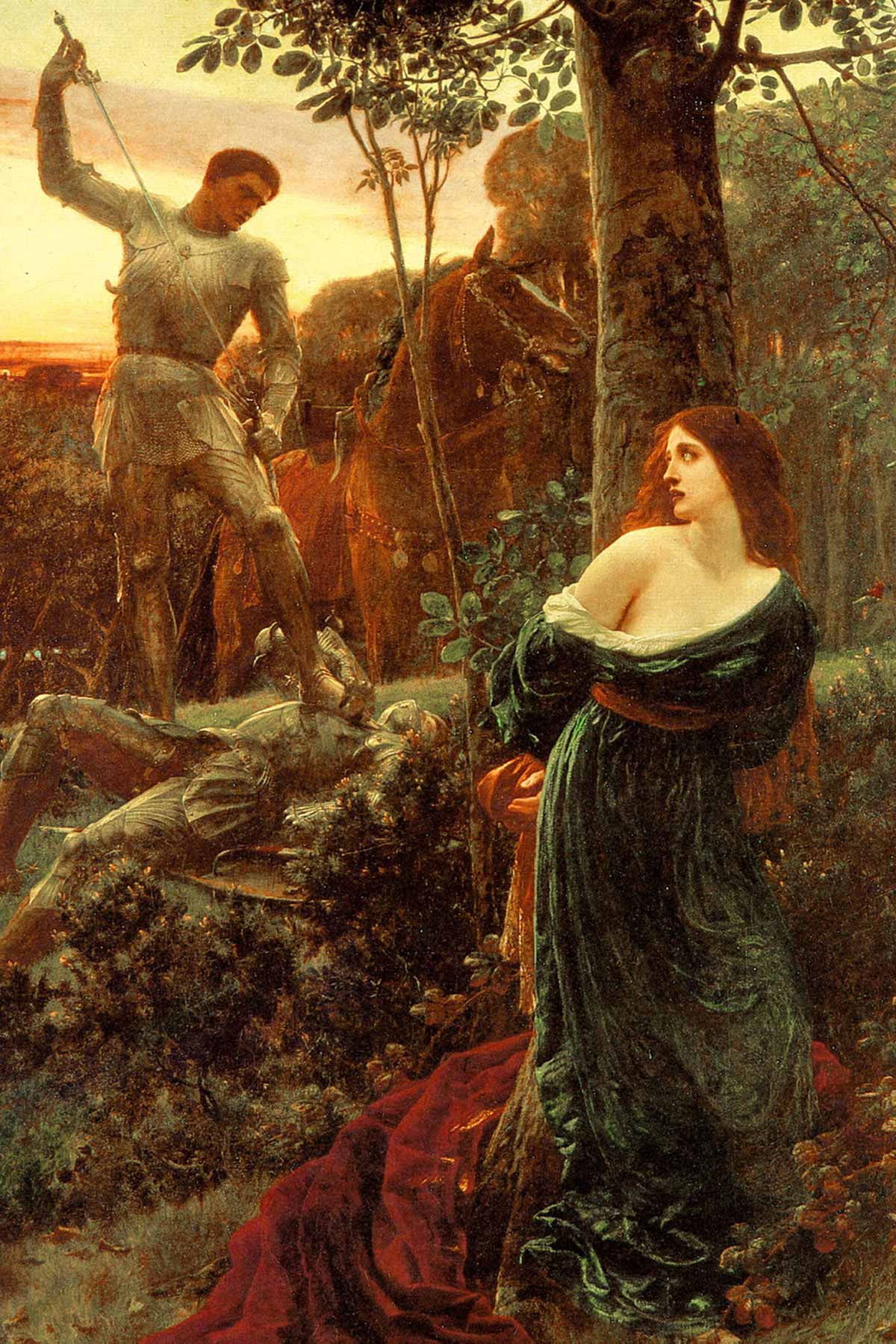 Cavaliers and chivalry are two sides of the same noble coin. It can be argued that chivalry, the high ideals of knightly behaviour, is but an aspect of the general code of conduct earlier described. After all, the virtues of chivalry, such as courtesy, courage, piety and the protection of the defenceless, are most often described as inherently benevolent qualities. However, due to controversy in the gender debate this aspect deserves further scrutiny. During the past decade it has been debated whether or not chivalry is chauvinistic – some proclaim that chivalry is a dumb idea while others believe it is pro-woman. The classic trope of the Damsel in Distress has echoed throughout history, from Perseus saving Andromeda to Superman saving Lois Lane. Still, fantasy LARP settings do not have to be bound by such stereotypical narratives. The time has also come for Wonder Woman to save Steve Trevor! To have Brienne of Tarth fight and overpower her male opponents! And allow the female heroines to also save the day as knight-errants in shining armour!

Chivalry seems to be a noble concept that has been strangely overshadowed by sexism and innuendos. Did you know that the Danish word for a cleavage is called “kavalergang” which literally translates as “cavaliers access”? This tendency trails into classical fantasy art which has been (and to some extent still is) heavy on fanservice in the form of stripperific chainmail bikinis. The trope is wonderfully parodied by CollegeHumor in 2011 and Epic NPC Man in 2016, but this blog post by C.U. Douglas also offers an interesting historical perspective on the subject. Do and dress as you please, but know that not even knights are exempted from this titillating and terrible pitfall!

From a player perspective the concept of knights and chivalry should extend beyond a binary gender approach. In tabletop role-play games and live-action role-play settings the notion of gender most often serves as flavour with no rulewise relevance. You are hit by a weapon, not a gender! Although, the friction between character genders can make compelling stories of culture, privilege and discrimination, the choice of genders from a player perspective is entirely your own. So is the knightly blade you are wielding. What is your chivalrous weapon of choice? A Crusader Sword or a Caprine Sword? Maybe something more blunt like a Steel Mace, Fleur Mace or even a Sun Hammer?

The stage is yours! Become knightly – and stay epic!